Laura Mish, RN, works in a medium security prison with an average daily population of 3300 male inmate. Here is one of her correctional nursing tales. Read another of Laura’s tales here.

Having been a correctional nurse at a state prison for nearly 16 years, I have many stories to tell. Some are sad, some are funny, and then there are those that you will never forget. They change your perspective, not only on correctional nursing, but on nursing in general. I have learned invaluable lessons from many of my inmate patients. Here is one you might like. 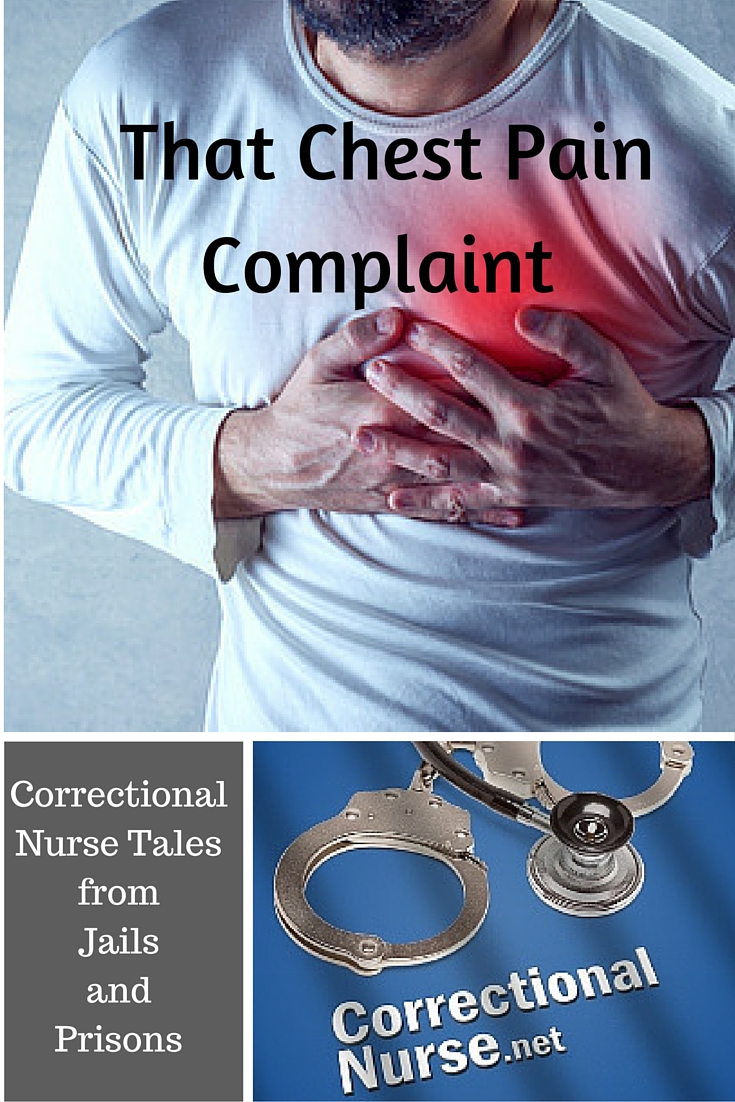 I was working evening shift one day as the compound nurse, and was called to medical in one of the buildings in general population for an emergency sick call. I was told that there was an inmate coming to medical with chest pain. He arrived shortly thereafter and I began to get information from him about his pain. I noted that he was only in his early 30’s.He told me that he was experiencing a feeling of pressure in the middle of his chest that had started earlier in the day. He said that the pain was getting worse as the day went on, but he denied any other symptoms., including pain radiating down his arm or shortness of breath.  While assessing him I noted that he was not diaphoretic, and did not seem to be in acute distress. His blood pressure was slightly elevated, but nothing of urgency. At the time I was considering a cardiac issue, but considering he had no other symptoms, I also thought he could be experiencing atypical chest pain. I had asked him if he ever had this type of pain in the past, and he stated that he had not. I thought that possibly he could have a muscle strain since he did tell me that the previous day he had been in the gym area working out.

In an instance such as this, it is very easy to dismiss the issue as muscle strain since he had been exercising, but something told me to do an EKG anyway. The EKG started to print out, and when I saw the results I was SO glad that I had decided to do the EKG. At that moment this inmate was in the process of having an acute MI! I looked over at him and saw that he was suddenly becoming very diaphoretic . I called the LPN to come and sit with him, and I told him “I’ll be right back” and practically ran out of the room! While I was calling 911 I asked the LPN to give him aspirin and nitroglycerin, and to recheck his blood pressure. I went back in to him and apologized for my abrupt exit from the room, and told him what was happening. Within a short period of time the paramedics arrived and their EKG also showed an acute MI, so he was quickly transported to the local ER.

About 2 weeks later I was working in our Extended Care Unit when I saw him. He had been housed in there after returning from the hospital. He immediately recognized me, and thanked me for acting so quickly in getting him out of there and to the hospital. He told me that he had to have an angioplasty done immediately after arriving in the ER that day, and said that the doctor in the ER told him that if too much more time had passed before he got to the hospital, his situation would have been very bleak. Turns out he had a major artery that was almost completely blocked! He returned to general population after his stay in the Extended Care Unit and had no further problems.

I often think about this situation, and remind myself to look further into symptoms that an inmate is experiencing. I could have very easily dismissed his chest pain as a muscle strain, but I’m so glad I went a step further and did an EKG. I hope that my story will one day be of help to someone, and be an example of how immediate medical attention and taking that extra step can save someone’s life!

Do you have a tale to share with others? Send your story to us and we will share it.   Let’s help each other become better correctional nurses!