Incarcerated women have increased chances for eating disorders and they can be deadly. The in-custody death of a young anorexic woman several years ago points out the potentially fatal nature of these conditions when extreme. This case was complicated by communication issues and recent changes in facility processes, but it exemplifies the concern correctional nurses should have for screening and initiating treatment for eating disorders when working with women inmates. 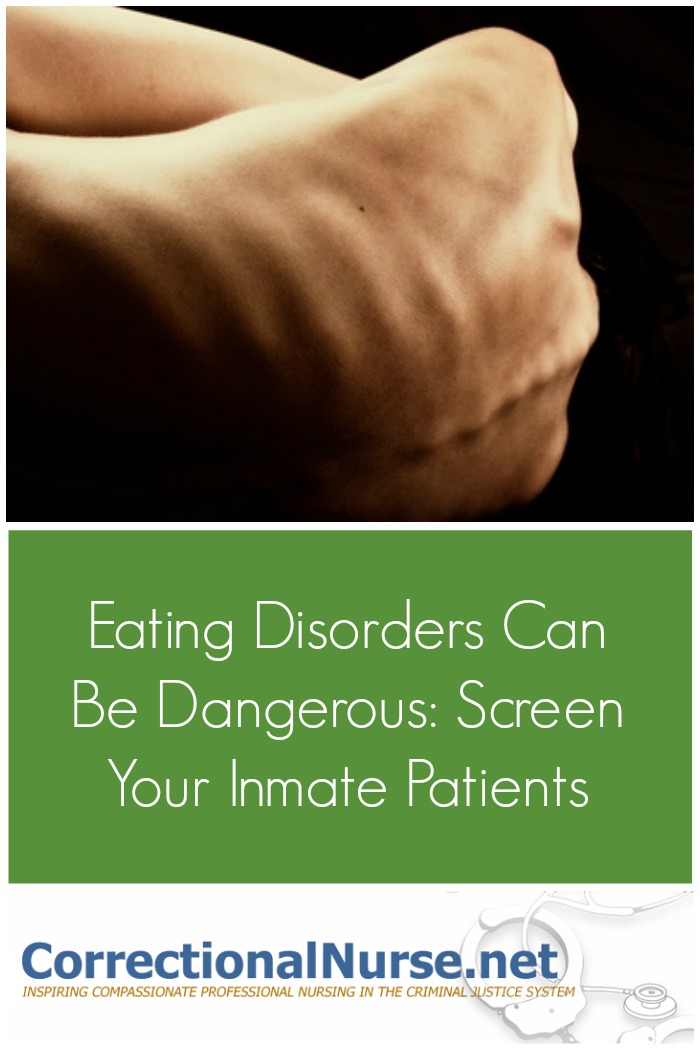 Eating disorders such as anorexia nervosa (AN) and bulimia nervosa (BN) are more common among young white women who are unhappy with their body size and shape. Added contributing factors include feelings of powerlessness and lack of control over life situations – common emotions during incarceration. Although the reported prevalence of eating disorders in the general population is less than 1%, one study found as many at 25% of female inmates in a British prison at risk for eating disorders. With the potential of one in four female inmates at risk for AN or BN, it is important to screen for this condition.

What should be done to identify patients with this disorder?

Be alert for eating disorders among the young females entering your facility. Loose-fitting garments may hide wasted torsos and boney appendages. Take a good look at muscle tone and skin thickness when performing a physical assessment. Bulimic women will usually maintain a low normal body weight but those with anorexia could show significant wasting.
In addition, consider adding a simple screening tool to subjectively evaluate for an eating disorder. The SCOFF Eating Disorder Questionnaire is widely advocated as an effective and rapid evaluation method. One point is assigned for every “yes”; a score greater than two (≥2) indicates a possible case of anorexia nervosa or bulimia nervosa.
SCOFF Questionnaire

S  – Do you make yourself SICK (vomit) because you feel uncomfortably full?

C  – Do you worry that you have lost CONTROL over how much you eat?

O  – Have you recently lost more than ONE stone (15 pounds) in a 3-month period?

F  – Do you believe yourself to be FAT when others say you are thin?

F  – Would you say that FOOD dominates your life?

What treatments are available of eating disorders?

If an eating disorder is suspected, a referral for mental health services is needed, in addition to a medical work-up. Women with eating disorders, especially AN, are at higher risk for suicide, osteoporosis, and electrolyte imbalances. Severe AN can cause dangerous electrolyte imbalances leading to cardiac arrhythmia. The in-custody death of the young female inmate in the story above could have been prevented with potassium supplementation.
How are you handling eating disorders at your facility? Share your story in the comments section of this post.