This guest post is written by Jaime Todd, MBA, LNHA. His bio is found at the end.

An elderly inmate was brought into the medical unit of a medium security prison to be checked for injury after an altercation in one of the housing units. He looked older than his 62 years and seemed disoriented. The nurse was not sure if the disorientation was from a concussion or another reason. The attending officer explained that the inmate wandered into the cell of another inmate and was rummaging through personal items. When confronted, he became agitated saying he was looking for his socks and was late for chow line. A scuffle ensued.

The prison population is aging! Correctional facilities will soon be confronted with caring for thousands of inmates suffering from Dementia related cognitive impairments. The core component in dementia care is effective communication. 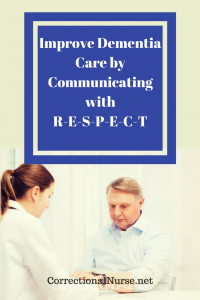 Dementia destroys the portion of the brain that controls language and communication. As the disease progresses, confusion increases and ability to express thoughts, desires, and needs is diminished. Frustration is common for anyone who can’t express needs. When frustration is not released through communication it may manifest in aggression or violence. The story above is a good example of what can happen.

The way to reduce confusion and enhance communication in those with dementia is to speak to them with RESPECT.

Always speak in a soft tone. Address by name and reintroduce yourself as often as needed. Avoid startling a confused inmate. Never tower over, or speak from behind a confused inmate; Face the inmate. For example, when the inmate is sitting, kneel-down until eye-to-eye, then begin speaking. Hearing aids and glasses are essential to accentuate communication. Reassuring the inmate with dementia helps focus their attention to be more receptive to communicate.

Inmates with dementia are often hypersensitive to disruption. It’s essential to create and maintain a soothing environment. Minimize distraction during conversations; be aware of background noise, avoid too much or too little light, and maintain a comfortable room temperature.

A peaceful, soothing environment can set the tone for the inmate having a relaxing day.
Frustration hastens agitation. At the first sign of frustration scan the room to identify a cause. Then eliminate the cause. For example, bright sunrays piercing a window may hurt their eyes; pull the drapes or blinds. However, if a frustration source isn’t identified move to a new location. Often, the simplest change can deflect the source.

Avoid complex themes and topics. Pronouns lead to speculation and erroneous interpretation; Use familiar language including nouns and proper names. Ask simple “yes/no” questions. Provide instructions one step at a time. If the inmate doesn’t understand a question, repeat it exactly the way it was first asked. Being specific with inmates will prevent increasing confusion and improve comprehension.

Continuity of care and familiarity with the inmate’s normal daily routine is vital. If you know the inmate prefers a bath, rather than a shower, give the bath. Make the room clutter free and lay out clothes in a logical sequence: undergarments, socks, shirt, pants, and shoes. Always provide one-step instructions and never rush the sequence.

Discovering lifelong patterns and preferences is part of anticipating needs; likes and dislikes, shower or bath times, eating times, nap times, and other conditioned routines. Minor changes in long-term routines, particularly morning rituals, can exacerbate confusion that builds throughout the day until the inmate is agitated.

The more agitated the inmate becomes, the more difficult it is to interpret the cause-and-effect relationship of their behavior. Resistance, irritation, or aggression may become the inmate’s way of nonverbally communicating that something is wrong. It’s critical to anticipate needs of the inmate: are they expressing hunger or thirst, pain, constipation, or need to go to the bathroom. Eliminating triggers throughout the day and anticipating needs will alleviate feelings of being overwhelmed and frustrated.

Actively listen and focus undivided attention on what the inmate is saying. If the inmate’s thought stops mid-sentence, repeat the last few words of their sentence as a cue. Additionally, the inmate may have trouble recalling words, or may substitute words similar to the sound or meaning of what they want to say; Guess what the inmate is struggling to say. If the guess is wrong, guess again.

When the inmate becomes too overwhelmed, or unable to focus, tell the inmate you’ll return shortly and you look forward to chatting again. After a brief break, try again. If nothing is working when you return, check to see if you might be the problem.

“Checking yourself” is about not making an assumption that the inmate isn’t capable of insight and then making decisions for the inmate. Always include the inmate in all decision-making, regardless of the level of confusion.

Continuously evaluate how you are communicating: Are you rushing or being impatient? Are you actively listening? Are you contradicting or displaying frustration? Are body postures negative (finger-pointing, rolling-eyes, turning away when spoken to, shrugging your shoulders, or shaking your head?) Inmates may be confused, but they still can detect rude or demeaning behavior. Always be respectful, compassionate, and maintain both positive body language and oral communication.

The most effective way to develop rapport with confused inmates is by showing appreciation and treating them with respect. Be thankful to spend time with the inmate. Rapport is essential to gaining their confidence and trust. As an inmate’s trust and comfort level increases, so does cooperation, making activities of daily living easier to complete throughout the day. Show a constant measure of genuine appreciation and frequently thank the inmate for spending time with you.

Striving to make effective communication a priority in dementia care environments creates a more peaceful living atmosphere, encourages independence, and allows residual cognitive strengths to surface and communication can materialize. When staff communicate with RESPECT, the inmate communicates better and your relationship with that inmate improves.

Mr. Todd is a healthcare reorganization/turnaround executive specializing in long-term care, acute care, behavioral and mental health, and primary care. A widely-published author of leadership, licensing/regulatory compliance, risk management, and healthcare operational management articles. He can be reached at jtandarlene@outlook.com.

This post contains information originally published I the Summer 2013 issue of CorrectCare – the magazine of the National Commission on Correctional Health Care. Used with Permission.

Previous Post: « Stress Reduction Through Yoga During Reentry (Podcast 148)
Next Post: Correctional Nursing and the Ethic of Social Justice »