The recent prison riot in Chino, CA brings to mind the need for a well prepared nursing staff to handle mass casualties. According to reliable reports, 250 inmates were injured, 55 seriously. How is nursing care during a prison riot? 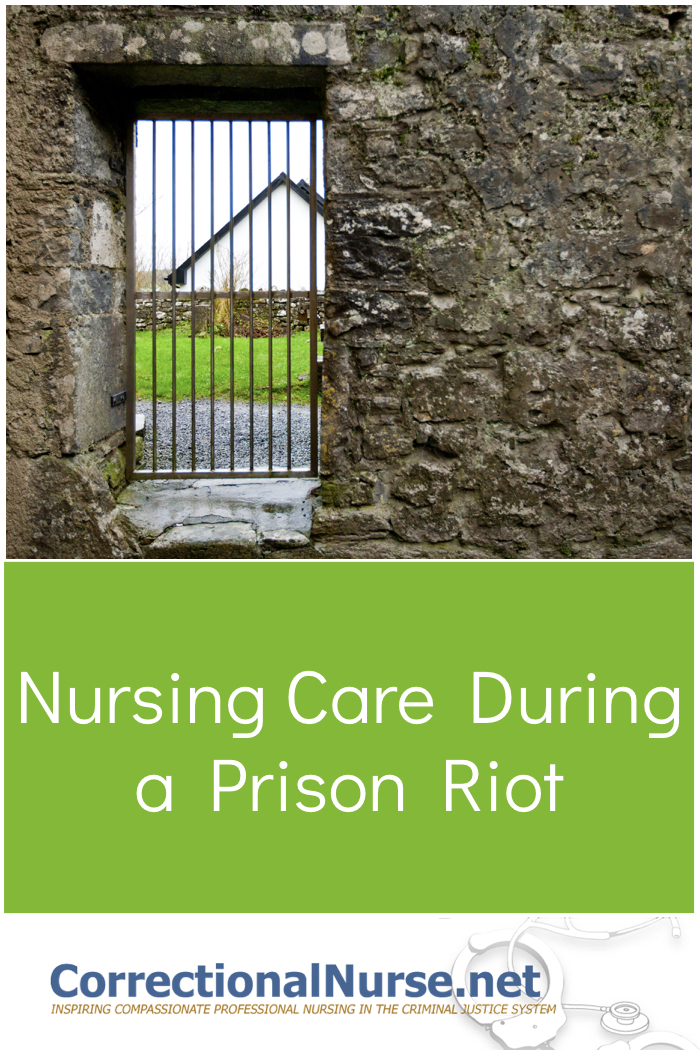 Nursing Care During a Prison Riot

What is the role of the correctional nurse in a riot?

Correctional healthcare staff prepare regularly for a mass casualty situation. In an accredited facility, a prison-wide disaster drill is enacted annually to review the processes and skills necessary to deal with a large influx of injuries. An area of the prison (possibly a rec area or exercise yard) would be designated to triage the victims. Once this area has been secured, correctional nurses provide immediate emergency evaluation and treatment to the inmates brought there by custody staff. They make determinations about the need to transport to a hospital based on degree of injury.

What other challenges for care delivery exist due to a riot?

A common practice during periods of unrest in a correctional facility is the practice of lockdown. Facility lockdown severly restricts inmate movement and communication. This standard procedure for containment reduces the chances for further violence but is a severe stress on manpower and normal processes. Increased security services are required and often increased healthcare staff are needed, as well. Since inmate movement is limited, normal healthcare processes like sick call and medication administration must take place cell-to-cell rather than having inmates travel to the medical unit. Facilities may not be set up to accommodate medication carts in the housing units and pills may have to be ‘pre-poured’ which increases the potential for errors. Diabetic’s insulin injections are now given on the cell block requiring transport of needles and vials. Privacy becomes an issue for various treatments and assessments.

What protection do healthcare staff have during a riot situation?

Prisons and jails are arranged to contain or separate various areas within the security parimeter, usually using a sally port system. Sally ports, strictly monitored and operating by custody staff, greatly increasing protection in an emergency situation. Inmate and staff movement is totally curtailed during the immediate danger. Once the violence is subdued and contained, staff members would be escorted in and out of the building.

In addition, once it is determined which inmates were the leaders of the riot, they will likely be transferred to different facilities to reduce communication, collusion, and/or retaliation.

A prison riot is an emergency situation requiring the skilled intervention of correctional nurses to assess and manage trauma victims. Custody officers and healthcare staff work together to deal with the emergency.

If you like this post, you might like:
Misconceptions About Traumatic Brain Injury in Correctional Health Care
Sleepless in Seattle: And Jails and Prisons Across the Country
Hurricane Sandy and Correctional Nurse Heroes
Soothing the Savage Beast: Music and Inmate Mood
Inmate Dementia: What’s a Correctional Nurse to Do?