Prison and jail medical units are over-represented by female staff, creating a number of challenges to avoid 5 danger signs of unhealthy inmate relationships. It is a common saying that the inmates go to medical to ‘enjoy the view’, and in one prison system in which I, we explicitly stated to all orientees that “You cannot have sex with an inmate.” As crass as that sounds, it was necessary to make it crystal clear that a sexual relationship with an inmate, no matter if it was consensual or not, was illegal in that state and would be prosecuted. In that same system former nursing staff were doing time for this very transgression.

Corrections professionals rarely start their careers expecting or desiring an intimate relationship with an inmate. So how does it happen? Here are some signs to watch for – not only for yourself, but for your team mates. 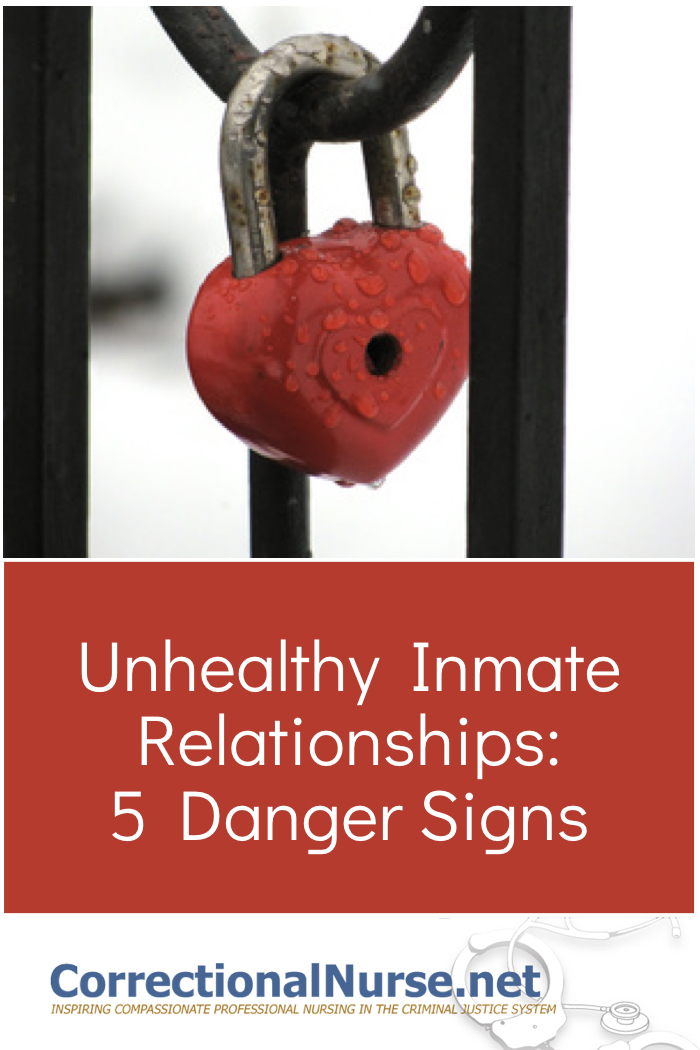 Manipulative inmates will study your attitudes and actions, using them to their own benefit. If an inmate convinces you to do even a small favor, you have started down the path of obligation. Feelings of obligation are universally human, but obligation to inmates is the enemy of a secure workplace.

• Don’t do even the smallest ‘favor’ for an inmate if it is against regulation
• Create clear boundaries in your relationships with inmates — firmness, fairness and consistent words, actions, and interactions protect you and others.

• If you find yourself attracted to a particular inmate, ask for a re-assignment immediately
• When the inmate comes to mind, immediately change your mental channel –think about something positive and motivational, and change your location or activity to help in re-orienting your thoughts
• If you see this sign in another officer, have a serious talk about it in private

Sign #5: Falling off the cliff
Yep, this is the Full Monty – personal and physical contact. The thing is done. At this point many procedures have been violated, rules breached and laws broken. This point is only reached after many of the above sign posts have been passed. But it is still not too late to turn back.

• If you know of a staff member in this situation, do something about it
• First, confront the colleague and suggest they turn themselves in — management and the courts are often more lenient with repentant transgressors
• If this is you, notify the inmate and turn yourself in — suggest the inmate do the same
• If you know about this activity and the fellow officer refuses to report themselves, you must do it for them — you protect your team, the officer, yourself, and the inmates by doing so
• Get help! Consider all your options including counseling, and legal or employee assistance.
• Seek a unit or facility transfer and take any accumulated time off to contemplate your future.

Take action now!
If you see yourself or a fellow staff member in any of the above descriptions, take action. Protect yourself and your peers. Unhealthy inmate relationships jeopardize not only the individual but also the security of other staff members. You are doing yourself and others a favor by intervening before it is too late.

What have we forgotten? Leave your strategies for avoiding inmate relationships in the comments section below.

If you like this post, you will like:
Inside the Mind of a Psychopath
Exertional Rhabdomyolysis: Inmate Bodybuilder Disaster
Diabetes Primer for the Correctional Nurse
Building a Trust Relationship with Inmates: Booby Traps
Ethical Boundaries: What Correctional Nurses Need to Know