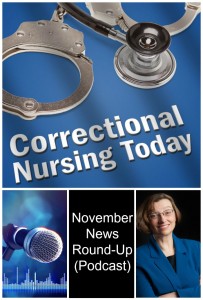 The November monthly news round up features correctional nurse experts talking about the correctional nursing implications of news stories from the last month. Returning panelist, Sue Lane, RN, CCHP is Infection Control Coordinator with Armor Correctional Health Services, Inc. at the Broward County Detention Centers in Fort Lauderdale, FL. In addition she is an NCCHC Surveyor and just completed a term as Chair of the Academy of Correctional Healthcare Professionals Board of Directors.

The first news item comes from the Texas Tribune where they report some concerns over year old legislation requiring inmate co-pay for some medical services. There are several schemes for inmate co-pay. The TX variety calls for $100 a year no matter the frequency of the visits and is not charged for emergencies, follow-up services or chronic care.

Generally, co-pays are a good idea but they involve a lot of book keeping and, if misunderstood, can lead to inmate delay in seeking healthcare, as described in the article. In addition, a high co-pay could be considered a barrier to care provision.

Our next story might be filed under “Inmates do the strangest things’ or maybe ‘Only in Corrections, Folks!” This is from a recent CDC report on a botulism outbreak last year in the Utah state prison that resulted in eight hospitalizations, three involving mechanical ventilator support. Epidemiologic investigation by the Center revealed the botulism was introduced into a batch of pruno through use of a baked potato. In NJ prison system, inmate-made alcohol is called hooch. In the southern states, inmate brew is called buck.

This story highlights the need for correctional nurses to be conscious of symptoms of infections, such as botulism, that are not common in the general population. Inmate creativity in creating alcoholic beverages can lead to uses of fresh fruits and vegetables that may have botulism spores.

Our next story is from California where prison over-crowding is leading to shifting of inmates back into the county jail systems. This article documents issues with blind prisoners, hearing aids, and paralyzed inmates. Our facilities were not really built for accommodating the disabled.

Disability identification and accommodation requires a joint effort between health care and correctional staff. Correctional nurses have an opportunity to collaborate with custody on appropriate accommodation of disability need and are in a unique position to advocate for their patients.

The Ohio prison system has seen significant savings through use of in-prison medical staff. The state had previously been contracting  with community doctors to provide medical services. Having prison-based providers has helped with continuity of care and a more efficient delivery system including more attention to prescription practices. They have already saved over 7 million dollars.

Panelists have seen similar efficiencies with inhouse medical staff. In addition, correctional nurses are benefited by a continuing relationship with a physician who knows the inmate population and the peculiarities of correctional medicine.

Behind Bars but Health Conscious

Our final story comes from Minnesota where they are attempting to increase inmate health awareness through an annual health fair. The article also describes a unit  of health conscious inmates and their practices. Prison is a tough place to keep up healthy living practices.

Nurses do the bulk of patient teaching in most clinical settings. Challenges for correctional nurses include the reading and understanding abilities of the patient population and the struggles of healthy living behind bars. Commissary goodies and bland, unappetizing prison food top the list of discussion items. In addition, nurses must help patients translate health instruction into the housing unit living situation.