Evelyn Bush, Correctional Program Specialist at the National Institute of Corrections in Washington, DC joins Lorry to talk about sex trafficking of female inmates. Some of her current work involves sex trafficking and the impact on the lives of women who come in contact with the correctional system. To more adequately educate medical and mental health professionals, she has facilitated the opportunity for a workshop titled Victims Behind Bars: Identifying and Addressing the Sex Trafficking of Women Offenders at the Spring Conference on Correctional Health Care in Minneapolis April 21-24, 2018. 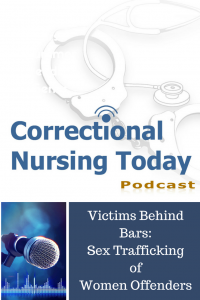 New Name for an Old Problem

Not a Victimless Crime

Many women who come into the system are in the sex trade, and not by choice. It is time to realize that prostitution is not a victimless crime. Victims of trafficking are often forced into “the life” of prostitution with an earlier background stemming from alcohol and drug abuse, broken homes, poor self-esteem and prior sexual abuse, with the trauma and victimization carrying well into adulthood. In fact, trafficking victims are often recruited into prostitution, groomed by their trafficker with a relationship and forced to comply through beatings, rape, starvation, and threats of violence to loved ones.

How Do We Respond?

What you need to know. Sex trafficking and sexual exploitation. A training tool for EMS providers

Do you care for female inmates? Could there be sex trafficking going on in your facility? Share your thoughts in the comments section of this post.