Tanya was working in a state prison in the nursing pool to make extra money for her college tuition. She was studying to be a nurse practitioner and thought it would be a good experience for her. Although she was learning much from her shifts there, she was also distressed by the treatment of a mentally ill inmate who was in solitary confinement for striking and injuring one of the officers.  Even in the short time she had been working there she had observed significant mental deterioration. In addition, the officers were rough and rude with this inmate; she assumed due to his injuring one of their own. Tanya was starting to lose sleep over this but she didn’t know what to do about it. 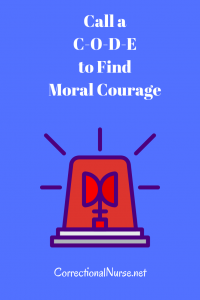 Nurses can feel moral distress over situations they observe in the correctional setting. Moral distress is experienced when painful feelings arise over the awareness of a morally inappropriate activity that cannot be resolved due to various obstacles. A common obstacle is that of the institution or organizational culture. This is what Tanya is experiencing. Distress can also come from the uncertainty of what action to take and what consequences might ensue. For example, could Tanya be sanctioned, rejected, ridiculed, or fired if action is taken?

Finding the moral courage to overcome distress and act in the face of these potential consequences is challenging. As in an emergency situation where all-out effort is needed, nurse ethicist, Vicki Lachman, suggests that we should call a code. That is an acronym for a 4-step process for finding the courage to act in the face of a moral dilemma.

Call a C-O-D-E when Moral Courage is Needed

Courage to be Moral

Taking a moral action requires courage. Where does the strength come from? For many nurses, the strength comes from alignment with the ethical standards of our profession. A review of the Code for Nurses can provide strength for action. Look for the particular element of the code that is in violation and ponder the importance of action for your own professional integrity as well as for the good of the patient in the situation.

The Code for Nurses is the ethical standard of nursing practice and establishes a nurse’s patient-centered valuing that is foundational to the profession. This is the primary place to determine our obligation in a moral dilemma. However, correctional nurses work within a security framework with its own value system. It can be important to consider what values drive others involved in the situation. The Institute of Global Ethics reviewed a wide variety of ethical codes and surveyed thousands of individuals to determine core moral values. They developed a list of the 5 primary values from this research: honesty, respect, responsibility, fairness, and compassion. Which of these values might be motivating others in the situation? These can then be considered in working through an action plan for response.

Nurses must acknowledge and manage the fear engendered in taking action in a risky situation. Successfully overcoming fear is, in fact, a definition of courage. Working through the prior steps can help in managing danger as they provide objective reasons for the action and establish the importance for proceeding. This can be powerful and should not be under-estimated.

Also suggested in the process of ‘decatastrophizing’ which involves working through the ‘what if’s’ of the situation. By objectifying fear, it can be demystified and balanced with the positive outcomes of action. This helps to cognitively reframe the situation and reduce negative thoughts. It also turns thoughts toward planning and action-taking rather than dwelling on fear.

The final step in the CODE process is to take the practical action that will overcome fear and resolve the issue. Action in a situation such as Tanya’s requires both assertiveness and negotiation skills. It requires an understanding of the organizational reporting structure. It requires the ability to be collaborative rather than confrontational with other disciplines.

Tanya was able to garner the moral courage to respond to her moral distress. Through her actions, the inmate was re-evaluated by mental health services and a treatment plan was initiated. She continues to work at the facility and is developing collaborative relationships with her healthcare and custody peers. She has resolved her moral distress and feels good about the outcome.

Have you needed to confront a moral dilemma in your correctional nursing work experience? Share your thoughts and experiences in the comments section of this post.

Find more information about moral courage in these other posts:

The Heavy Burden of Moral Distress in Correctional Nursing