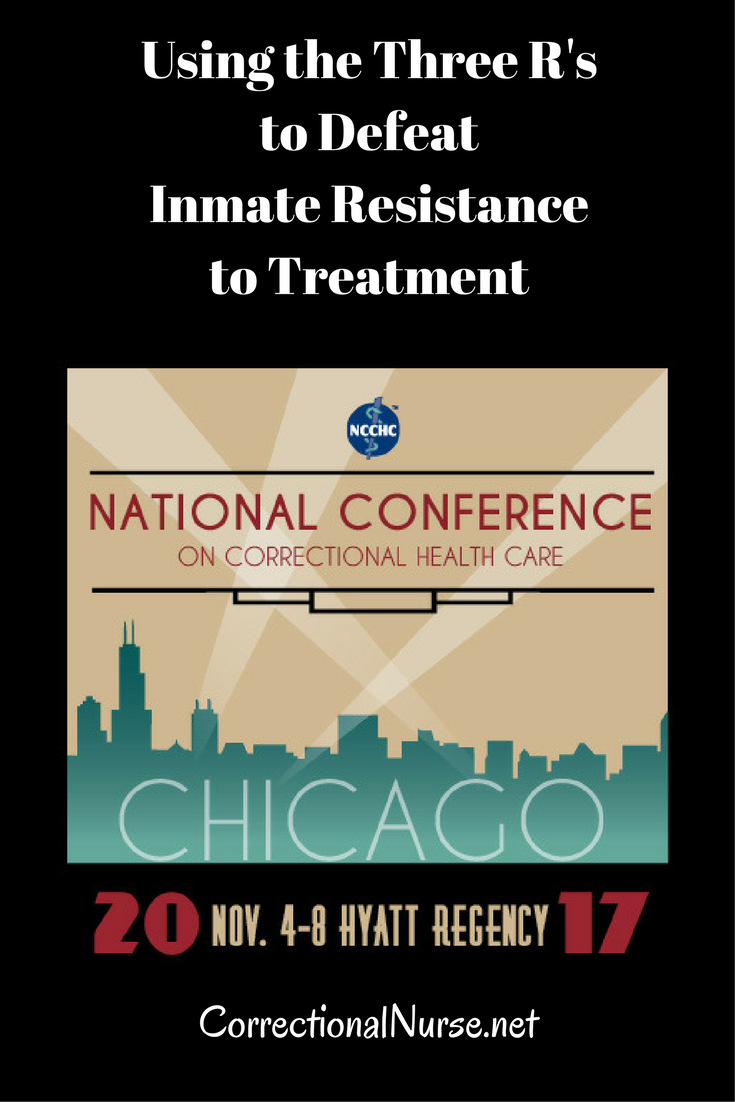 Bill Elliott, PhD, is Regional Mental Health Director for Wexford Health Sources, working in Illinois. This post is based on his session “Using the Three Rs to Defeat Inmate Resistance to Treatment” taking place at the 2017 National Conference on Correctional Health Care in Chicago, November 4-8, 2017. Learn more about the conference and register HERE.

Inmate patients can be highly resistant to lifestyle and perspective changes that are needed for health improvement. Encouraging and counseling patients can be frustrating and discouraging. Consider this scenario:

Inmate Paulson is at his quarterly chronic care visit for his long-standing Type II diabetes. The chronic care nurse has been trying to work with him on improving his dietary choices. He is 60 pounds overweight, having gained 10 pounds since his last chronic care visit. The nurse has reviewed Mr. Paulson’s commissary purchases and asked him about the dozen honey buns he purchased last week. He confirms that he ate them all and stated, “That commissary is only open once a week for my dorm. If it were open more often I wouldn’t have to buy so many at a time to tempt me to overeat. I had a little problem with a binge when the C.O. wouldn’t let me talk to my daughter. All the honey buns kind of disappeared in one night.”

Resistance to treatment can take many forms. Here are some common behaviors indicating resistance.

Many inmate patients use the same power and control tactics on health care staff that have worked in other areas of their lives. Domination, exploitation, and humiliation of others have been successful strategies for obtaining what they want. Why not use them in interactions in the medical unit?

When working with a patient who is resisting treatment, Dr. Bill Elliott, who has worked as a mental health professional in the criminal justice system for nearly four decades, recommends the use of the Three R’s.

Redirection: Inmate patients will often attempt to regain control of a treatment encounter when information or calls-to-action are unpalatable. This is done by changing the subject or talking about a similar, but less threatening, subject. Redirection is the professional’s guidance of the conversation back to the task at hand. In the scenario above, the patient tried to change the subject by complaining about how infrequently he is able to get to the commissary. This was an attempt to avoid discussing his poor food choices. The nurse could simply redirect the conversation back to discussing food choices without being sidetracked into engaging in the patient complaint.

Reframing: This intervention asks the patient to change their perspective. This can be done in four ways.

While fully describing these concepts is not possible in this short post, more detail can be found in the article “Managing Offender Resistance to Counseling” authored by Dr. Elliott.

Reversal of Responsibility: Inmates frequently make excuses and justify their actions by blaming victims or societal injustice. This life perspective will also show up in health-related interactions. Unfortunately, it will be difficult to eradicate decades of self-justification and evasion of personal responsibility. Getting into a power struggle will be counterproductive to the goal of your treatment session. Instead, clarify what the patient is saying through reversal of the externalized blame. In the scenario above, the nurse might respond by stating, “I see, so, in other words, you had no choice but to buy a dozen honey buns at the commissary last week and eat them all at once.” This reversal of information must be delivered in a kind and respectful voice tone to be successful. Harsh or humiliating tone and body language could spiral into a defensive and resistant posture that will not lead to meaningful change.

While the use of the three R’s has been very successful in practice, Dr. Elliott cautions that these strategies need to be delivered carefully. Never exceed your comfort level or expertise as you develop skill. Be sure to deliver the message in a calm, unemotional, and respectful manner. Avoid power struggles with the patient.

By using the three R’s with inmate patients, you, too, may be able to turn around a frustrating counseling session and encourage healthy change.

This post is part of a series discussing topics addressed during sessions of the 2017 National Conference on Correctional Health Care. All posts in this series can be found HERE.