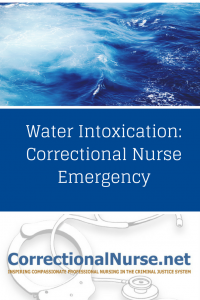 Can you really get too much water? I wouldn’t have thought so. Goodness, we have been encouraged to drink more water for our health and hydration from many sources. Here is just one example from WebMD. Yet, some of our patients are dying from too much water. Here are just two examples from a Michigan prison and from the San Diego Central Jail. Considered a rare condition in the general US population, water intoxication, also called psychogenic polydipsia (PPD), can happen more frequently in correctional settings. Correctional nurses and our officer colleagues need to be aware of this condition and act quickly to save lives.

This condition originally got my attention when I was on a risk management site visit a few years back. A correctional officer working in the mental health housing unit of a large jail shared a story of an inmate who began drinking water uncontrollably. This officer knew that wasn’t normal and asked the mental health nurse to evaluate the situation. This case had a good outcome in that the patient was evaluated and a PPD diagnosis was made early before things got out of hand. Unfortunately, as you can read in the accounts of the water intoxication deaths in Michigan and California, all too often the condition is not detected or managed well.

What is Water Intoxication?

Simply put, water intoxication is drinking more fluid than the body can physiologically handle. This fluid overload affects the electrolyte balance in the body by causing sodium levels and plasma osmolality to drop beyond what can normally be handled by the kidneys. Below are some physical signs of hyponatremia caused by water intoxication:

The electrolyte imbalance also causes behavior and affect changes, but these can easily be mistaken for amplification of an underlying mental disorder:

Rapid fluid shifts in the brain can lead to seizures, coma, and death. This is a serious condition that needs early diagnosis and treatment.

Who is Prone to This Condition?

In both these cases, the patient had schizophrenia. Indeed, up to 20% of psychiatric patients can have PPD. The increased proportion of mentally ill in the incarcerated patient population is a major factor in the frequency of water intoxication accounts in correctional practice.

The following categories of patients are also prone to hyponatremia:

While most correctional nurses will not be managing patient on TPN, drug use is high in the inmate population and some athletic competitions among inmates can get out of hand. Mainly, though, this condition will crop up in the psychiatric patient population.

What is the Treatment for Water Intoxication?

Managing water intoxication can be difficult.  Here are some suggestions from psychiatrists Perch and O’Connor.

Have you ever had a patient with water intoxication in your setting? Share your experiences in the comments section of this post.