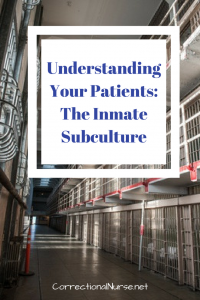 Understanding your patient’s life situation and cultural influences can help you be an effective nurse whatever patient population you care for. Recognizing the social and economic framework in which incarcerated patients live each day can help you be successful as a correctional nurse.

In another post, I discussed the criminal lifestyle. This is described as the mindset and influences that some inmates bring into the institution.  Our patients also absorb the culture and norms of the correctional institution. This is called prisonization. It involves the behaviors, values, rules, and customs of the inmate subculture in a particular institution and is learned through socialization and observation. Our patients also observe and learn about staff members such as who follows the rules, who is an easy touch, and who can be influenced.

Gangs and the Convict Code

David Skarbek researched the inmate subculture in the California Prison System. His book “The Social Order of the Underworld” provides a historical context to how prisoners organize and manage their society. He was a guest on this podcast.  He describes the use of a pervasive ‘convict code’ that managed inmate society. This code began breaking down in the 1960’s with prison rioting and continued to deteriorate as prison populations soared through the 1980’s. While the code is no longer universal, some concepts from the code remain in the inmate subculture of many facilities. Here are a few rules that are quickly learned by new inmates.

The breakdown of the convict code led to increased gang activity. Prison gangs provide social order and protection in many violent correctional settings. They also provide structure to the prison economy of contraband and drugs. It can be hard to avoid joining a gang and many inmates feel they have no choice if serving a long sentence.

How Inmates Do Time

According to Gary Cornelious, inmates ‘do time’ by adapting and coping.

Impact on the Nurse-Patient Relationship

What about your experience with inmate patients? Share your thoughts about the impact of the inmate subculture on your nursing practice in the comments section of this post.

Previous Post: « The Elephant in the Jail: Tackling the Challenge of Substance Misuse (Podcast 144)
Next Post: The New NCCHC Accreditation Standards are Here! »

This month we are offering Deep Vein Thrombosis and Pulmonary Embolism for the Correctional Nurse at a 50% discount.    Check it out!