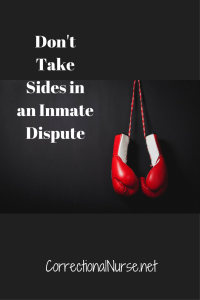 Inmates live in a harsh reality and a scarce economy. Stripped of most personal possessions and living on an imposed schedule, they have little control over their lives. Correctional nurses see the same patients day after day, sometimes for years, and can get to know their patients well.  However, inmates must still be kept at a distance as familiarity can lead to personal and professional harm. I’ve written in the past about being fair with inmates, avoiding being drawn in by a con, and avoiding being a target for manipulation. In this post, I’d like to talk about another important principle – staying out of inmate conflicts and arguments.

Your patients will try to get you to referee their disputes if they see indications that you are someone who “wants to help”.  Here are a few examples of healthcare-related conflicts that you might be asked to resolve.

In each of these cases, it would be easy to get into the middle of the dispute. In fact, it may seem the best option. However, intervening can cross the boundary from professional to personal. This boundary needs to be clear and firm in correctional nursing practice.

If you are asked to come to the defense of an inmate in a dispute, such as the situation above involving contraband medication, redirect the inmate to the grievance process. You can be empathetic without intervening. An example statement might be “I’m sorry this is happening but I’m not the right person to help you.”

How to Avoid Inmate Conflicts

Practice these personal rules to avoid getting entangled in inmate conflicts

Most correctional settings have a process for inmates to resolve problems. Here is an example from the PADOC Inmate Handbook.

“Problems on your housing unit should first be directed to a Corrections Officer on the Unit. If the officer cannot resolve the issue, you should bring the problem to the attention of your counselor or Unit Manager. If the issue is not resolved at that level, it should be brought to the attention of the Zone/Area Lieutenant, Shift Commander, then the Major, or the proper chain of command at your facility.”

Most situations can be resolved by knowing and acting upon the rules and regulations of the correctional system under which you work.

Have you been asked to sort out an inmate dispute? Share your experiences and actions in the comments section of this post.