David Turner, RN, works in a maximum security receiving facility with an average daily population of 1600 male inmates. Here is his Correctional Nurse Tales from Jails and Prisons: Nurse Radar 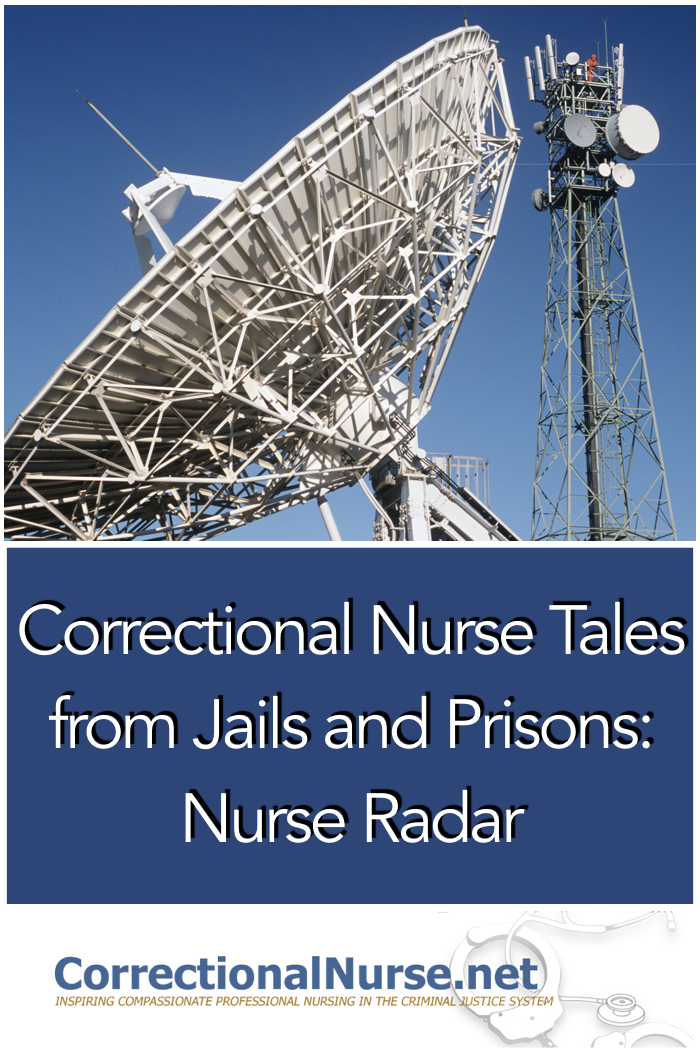 I spent the first 20+ years of my nursing career in the Emergency Department (ED) – a role I loved and thought I would never want to leave.  Well, time marches on, we get a little older and not as enthusiastic about 12 hour shifts wearing running shoes.  After just over 3 years in corrections nursing, I know now that the ED was really just a fancy, fast paced training ground for nursing in prison.  Many of the same personalities, the same demanding behaviors, the same exaggerated complaints, and the same impatience for treatment of a week old complaint exist behind bars. And, oh yes, the same truly sick or injured patients who had nowhere else to go for care are here, too.

One of the most useful skills I’ve developed in the ED and utilize now in corrections is nursing intuition.  I call it “nursing radar”.  You know what I mean, that persistent feeling that “something’s not right here.”  When objective findings are few, lab values normal, x-rays unimpressive, but the little hairs on the back of your neck keep telling you that this person is sick, maybe really sick – that’s “nurse radar” in action.

A short time ago my “nursing radar” kicked in when I assessed a medical emergency for a headache.  My patient complained of a frontal headache x4 days and had been seen twice by providers in the last 3 days.  NSAID pain relief had failed and the patient complained that the pain was getting worse.  Assessment findings were unremarkable, he denied associated nausea/vomiting, tinnitus, vision changes, neck pain, and fever.  But that “nursing radar” of mine kept going off.  He looked like someone in a lot of pain.

Speaking by phone with the on-call provider, we performed several neuro tests, attempted to read the Snellen chart (the patient has 20/200 vision but could not wear his glasses due to the headache pain) and tested a few gait and stability maneuvers.  All with negative results.  When I received orders from the on-call provider for NSAID’s and a follow up the next day, I described my feelings of uneasiness. Fortunately, the provider trusted my instincts and agreed to send him out to the local hospital for further evaluation.

We later learned that the patient underwent a CT scan, lab work and a lumbar puncture with CSF evaluation. Much to our surprise, blood work indicated previously undiagnosed HIV infection and the patient’s CSF was positive for Cryptococcal Meningitis.  He remains in the hospital after over three weeks receiving both oral and IV antibiotics and amphotericin b infusions. We also learned that Cryptococcal Meningitis is the leading cause of death among people with HIV who do not exhibit signs and symptoms of AIDS. Unfortunately, outcomes, with and without treatment, are not encouraging.

Trust your instincts. Trust your judgment. Trust your skills. Trust your “nursing radar”. Even if all the objective data seems normal, discuss your concerns with the provider and get the patient to the next level of care. In this situation, higher level diagnostics were needed to find the cause of the headache.

Do you have a tale to share with others? Send your story to lorry@correctionalnurse.net. Let’s help each other become better correctional nurses!

Previous Post: « January 2016 News Round Up (Podcast Episode 113)
Next Post: The New Code of Ethics for Nurses: Some Things Never Change »